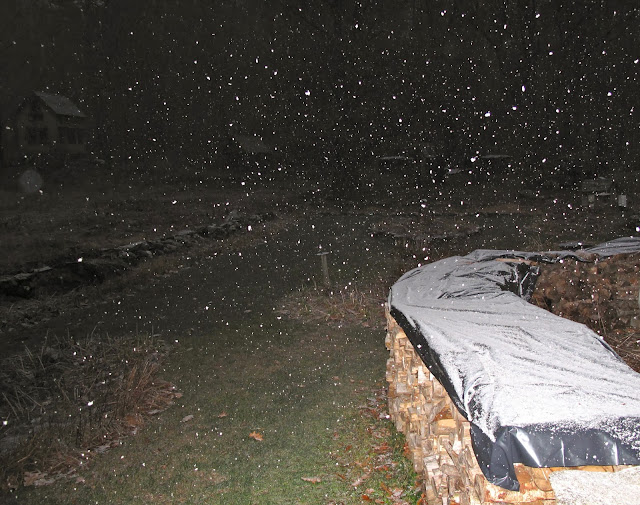 We had snow this morning. It stuck. I awoke and peeked from the bed through our broad windows and I could see what looked like white blossoms on the trees. I thought, just maybe, I had slept through winter and it was the first of spring and the shad trees were again blooming like they did in our dooryard . . .

Text & photographs by the author

Each of the two booklets published by Longhouse shown here contain a chapter selected from Malcolm Ritchie's recently completed (unpublished) memoir, The Crows of Gravity.

"A Village at the End of Culture is a cameo from our three-and-a-half year sojourn in the remote farming/fishing village of Sora, on the Japan Sea coast.  It describes our realization that what we were experiencing and witnessing was the last living breath of a profound culture still lived at the cradle of its birth in the cultivation of rice, and under the tutelage of its ancient gods.  The fragile survival of a holistic way of life, somehow still extant, but fast disappearing with the demise of the aged inhabitants of Sora and its neighbouring communities.  A way of living which expresses the true definition of the term ‘culture’ with its roots in the Latin cultura and its meaning of ‘cultivation’ – connection with the natural environment and the seasonal cycles, and its association with cultus, to worship.  The loss of a meaningful life being hastened by the ravening appetites of Western materialism/consumerism and its global markets, which had already transformed mainstream Japanese culture and distorted its traditional cultural mind-set."

Text & photographs by the author

"Encounter with the Great Mother recounts my experience with the psychotropic plant ayahuasca, referred to as Mother Ayahuasca by the peoples of the Amazonian rainforest, and worked with as a sacramental medicine in their sacred ceremonies.  It describes my encounter with a profound intelligence which spoke to me both cosmically, and with a deep knowledge, or seeming familiarity with my own individual psyche – the compassionate heart/mind of the planet we are in the habit of calling, while forgetting the truth of, ‘Mother Earth’."

Use Paypal to Order Malcolm Ritchie's
Encounter with the Great Mother ~