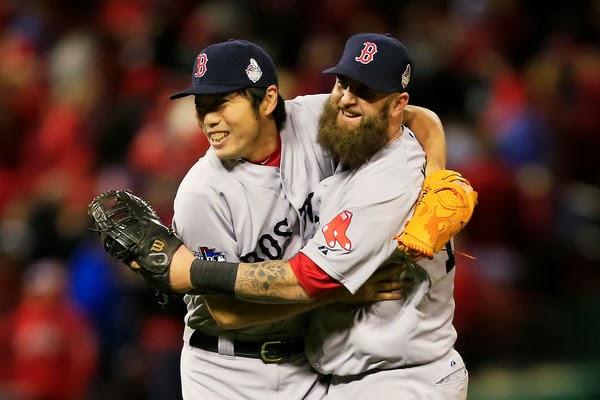 It takes a little while to fall in with the Boston Red Sox, especially if you were raised in Massachusetts as a kid and never really liked them, as I was. I was brought up on Willie Mays and Mickey Mantle. Case closed. I still like to see Hank Aaron show up at an event."Yaz" and all the Boston razzamatazz just seemed irritating. Once more Boston having to show and prove they were that city all by itself. My two Boston sports heroes Bill Russell and Larry Bird even had trouble with Boston for one reason or another, or the city had trouble with one of them, and just maybe it was because one was black, amazing, independent and out spoken. Boston has a chip on its shoulder and still it gets laughed at behind its back — The Big Dig, its rock music groups, the Red Sox ups and downs in the World Series — this getting no respect puts a little arrogance onto the landscape and onto its players. Bomb the city's Boston Marathon and they bring a grass roots fierce police vengeance onto your ass. Come to watch the World Series in 2013 after months away from sports and tv because you've been building with stone like any western Massachusetts boy could-be growing up around the stuff and you'll see a whole Boston team in beards. Not trim fireman beards neither. Duck Dynasty potential facial hair and with the same mechanic eyes. Eyes pointing down to the earth, moody and greasy and a little smug and sassy and the only ones willing to get themselves dirty. Compared to the St. Louis Cardinals, who look polite and clean-cut, in sparkling Busch Stadium, you begin to sense that this Boston team of beard weirdos is really representing all what we once (still) loved about the world: camaraderie, beards being tugged guy to guy after an RBI, dumb mistakes on the field taken too seriously and with silly excuses or grumbling later repaired by knuckling under and getting-er-done. It's a world of rotary dial telephones, bicycles, old pickup trucks, paperback books, laundromats, talking neighborhoods. The greatest hitter period on the World Series field no matter which city we are in is the Red Sox 38 year old David Ortiz  — huge, black and articulate. He comes to home plate with a bat in his hands like Paul Bunyan with an axe. He strikes the plate like Bunyan with his axe to an unfortunate stump as if announcing he is here, then proves it. He's 7 for 10 in the series and has reached base 11 of 15 times at bat. He's getting-er-dun. Baseball legend already has him pinpointed at making a 6th inning speech in the dugout to all the team telling them to "play free and loose." Which is nothing at all how he looks striding to the plate but exactly how he finishes up. Fellow player Jonny Gomes, who just inched a homer over the left field fence in game 4 said watching Ortiz at work in the dugout making his little speech was like, "24 kindergartners looking up at their teacher." You see — despite all the beards and cathartic chest thumping, they're all just a bunch of eager kids wanting to win. After Boston once again proved they are the only team in the world that can end a World Series game as they did game 3 — with mistakes and more mistakes tumbling over more mistakes — they showed within 24 hours that glorious New England trait of old colonial tenacity how they can recover, get the barn built, the door closed, and all the cows are in by dark. It was a pick-off play at first base that even surprised the camera operators broadcasting the game. Sure woke us all up at midnight! Between a pitcher on the mound named Koji Uehera and a Cardinal rookie player stepped away from the base a bit too far by the name of Kolten Wong. You've come a long way, baby. We've got a Series.