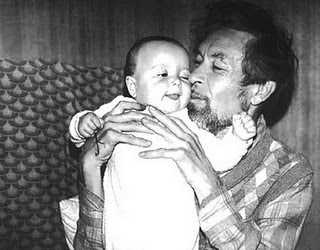 
It's a New Morning, at least for me, on each new book publication in English by the Chuvashia born poet Gennady Aygi. Aygi wasn't published in the Soviet Union until the 1980s, and since then he has been widely translated by Peter France and others. . .the most recent gift through the skilled eyes of Sarah Valentine which shows an immediate freshness and Aygi's connection to the outdoors — of both landscape and language. I also much like Valentine's direct speak and thought around modern poetry:

"I think many poets in the United States today struggle with a feeling of irrelevance, of impotence in the face of global-scale crises. Sidelined in a mass-media, technology-driven culture, the American poet seems to have a slim chance of connecting with an audience, and even less of a chance to effect large-scale change through poetry. But elsewhere in the world many poets, like Aygi in the Soviet Union, wrote and continue to write poetry at the risk of losing their lives and livelihoods. For them poetry is an ethical act, an act of humanity, regardless of the cost. Many of Aygi's poems confront the political and social crises of his age, but many others are small poems about the beauty of fields and flowers, the birth of a child. Some consist of only a few lines, a few words, or a single word, or a single letter.

Why bother? What difference could jotting down a few lines about flowers possibly make? The answer, I think, for Aygi was that each word of each poems was part of a grander project, an exploration of the nature of existence, of our place in this universe — whatever that is — of what lies beyond the limits of our knowing, and of how, through a humane art, we can maintain our connection with all of it. Also, and perhaps most importantly, each poem is a celebration of mystery, of the fact that, though we pursue these questions, life in all its forms is a mysterious gift. That, if we can find it, there is always enough light — sometimes even on the petal of a flower — to dispel the darkness."

ONCE AGAIN — INTO THE SNOW

and you begin to sing — and I am disappearing

darkening in the dusk

somewhere far away) and the broken board appears

there — among the ruins

in the abandoned shack (they sang whispered

cried long ago — it seems

from great joy) and in the distance the forest

opens — and you are singing

for it's already over)

(though even without us eternity

though you're becoming too muffled

cuts through the woods

take the forest sounds on their backs

her pigtails on her back without a plan

as in a dream begin a village

looking over the fire tower's edge

and there in the clearing in the wind

beyond the far heart of the golden rain

a birch plays with out a birch

into u without u


in the invisible glow

and I know that this uselessness

is what the country needs from me

indeed for my whole life


Muteness is a tribute — but silence is for myself


to grow accustomed to silence

as if a well-known place there

and in this I am — as Poetry is

that my work is both hard and for itself alone

at the city graveyard

I took a pail and went for water

because we had no water.

I sat next to my pail and cried

because we had no joy.

Back in those days

I was no taller than the pail.

"Mother" I whispered — the meadow hushed,

What was I trying to name was silence:

Only to my song,

my cap goes off to
Wave Books
www.wavepoetry.com
for making such a gift

Labels: Gennady Aygi, Sarah Valentine
Newer Post Older Post Home
A poem (or more) will be offered by the hour or with the day and at the very least once a week. So stay on your webbed toes. The aim is to share good hearty-to-eat poetry. This is a birdhouse size file from the larger Longhouse which has been publishing from backwoods Vermont since 1971 books, hundreds of foldout booklets, postcards, sheafs, CD, landscape art, street readings, web publication, and notes left for the milkman. Established by Bob & Susan Arnold for your pleasure.
The poems, essays, films & photographs on this site are copyrighted and may not be reproduced without the author's go-ahead.
Write Bob or the Bookshop